The following is probably embellished.
Stan would’ve appreciated that.

I bobbed and weaved through the maddening and crowded Javits Center. This was 2008, when New York Comic Con “crowds” quaintly equaled a quarter of what they do now. I finally made it to the designated booth, just as early as instructed. Only eight or nine people stood in line. Why aren’t there more? Was I in the right place? I checked my email printout six or seven times before finally asking the last woman in the queue. She assured me I was.

At some point in the week or two before arriving at the show, I – while sleep deprived – decided to drop $100 on the Hero Initiative via eBay for the pleasure of waiting in this very spot. Ever since I clicked “Buy” I wondered if I was wasting my money. I did that a lot in the weeks since my mother died. Was this just another bit of retail therapy I thought I needed? NYCC was already the largest and most expensive convention I ever attended. I didn’t need this. After my opinion waffled a few more times, I accepted my inability to rescind a donation from a cause I normally championed. Plus, this had the bonus of guaranteeing me two signed books, a photograph, and a few minutes with a hero himself: Stan “The Man” Lee!

I gingerly removed three bagged-and-boarded books from my backpack and waited. Two of them weren’t Mr. Lee’s most notable works. They were actually quite recent, but fun, stories. More importantly, the issues were easily accessible when I was in said sleep-deprived state before the trip. The third book I held was something else entirely.

Slowly (and I mean ever so slowly) more people joined the booth’s semi-coherent crowd. I swapped fan stories and highlights with the couple ahead of me and the woman behind me. The couple explained they lucked into meeting Mr. Lee on the street outside the San Diego Comic-Con one year! The woman followed her excitement with a quick side-eye glare at her boyfriend.

Finally, the general crowd in the aisle between booths parted and Mr. Lee appeared, flanked by an army of security, handlers, and assistants. He gave a broad wave with both hands and said, “Hey there, True Believers! Are you here for little old me?” We immediately cheered. At 85, the showman still knew how to work an audience.

What followed was a pace Pietro Maximoff would’ve found infuriating.

And then the waiting continued to the 25-minute mark.

At 30 minutes, I stressed again. The Hero Initiative’s email told us this event would be one hour, no more, no less. I was tenth in the line and had barely moved! What was taking so long? I kept craning my neck in hopes I could see or hear something, but Javits’ constant movement and rabble didn’t help.

As two people exited, grinning with their signed books, the boyfriend in the couple ahead of me finally got a good look. He, too, began to grin. “Stan’s talking to everybody.” The celebrity in our midst made sure everyone truly got their “few minutes” – the schedule be damned!

“Excuse me,” the first security attendant said as he inspected the couple’s ticket. He could’ve been Lou Ferrigno’s twin. “This is only for one person.” The boyfriend explained he was only there to take his girlfriend’s picture. They were waved forward.

“Excuse me, sir,” the same man said to me. He pointed at my three books. “You’re only allowed two signatures.” I thanked him for the reminder and explained the third (not comic) book was for me and he had nothing to worry about. I even split up the books, holding the two for signing in my left hand and kept the other in my right. He let me continue.

As I finally inched closer to the meeting of meetings, the woman ahead explained to Mr. Lee – and indirectly, me – that glare. When the couple had stumbled into their previous encounter with the writer, he agreed to take photo with her. The boyfriend set up the shot, gave them the one-two-three, and took a beautiful photo with their digital camera. And then he accidentally deleted said image as soon as Mr. Lee walked away.

“Well then, he clearly can’t take the picture,” Mr. Lee said. He pointed at me. “Do you know how to operate that camera?”

It was a Sony, like mine. “Y-yes.” I had never been star struck before. Was he really talking to me?

The boyfriend laughed, exaggerated a bow, and went to hand me their camera. I set my books down and took the device. I felt the weight of the couple’s relationship on my shoulders as I framed the subjects as perfectly as possible and made sure they smiled. After the flash, Stan looked at the woman. “Does that take video?” She apprehensively nodded. In my direction, he moved his arm like he was operating a reel-to-reel camera. “Start recording, good sir!”

I was not going to disobey Stan. I hit record and witnessed a fan interview a legend for several minutes. It was astonishing to see that much care for someone he didn’t know five minutes earlier.

The couple gathered their belongings while I passed my own camera to the woman behind me. She offered to help, I guess in a pay-it-forward (or would this be backward?) gesture. After the space was finally clear, Stan shrugged to me. “I tell you, some people just can’t handle technology. Thanks for the help!” He shook my hand and posed for a photo, careful not to disrupt the rainbow of Sharpies organized in front of him. 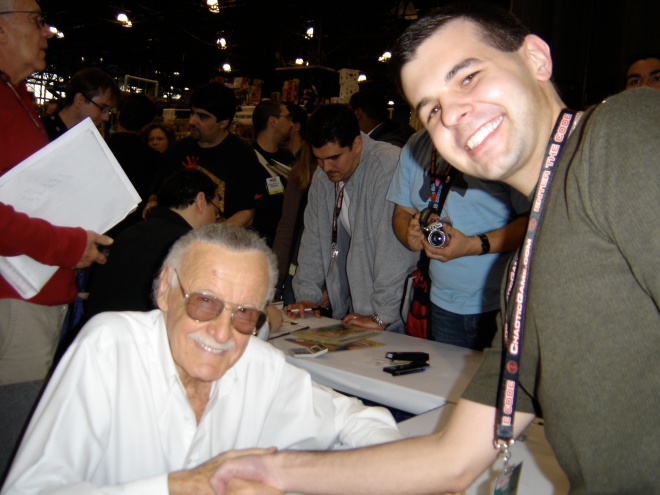 “Are we signing something?” the co-creator of a universe asked.

I tried to find words.

“Yes,” I finally managed. “But first, this is for you.” I made sure the Hulk wasn’t paying attention and handed him the third book: a copy of a Spring 2006 college lit mag with page 15 bookmarked. That was an essay wherein I browsed Comics on the Green while talking to Peter Parker. Through that premise, the piece said everything I feared I couldn’t in that instance. It explained how much Stan and Steve Ditko’s creation meant to me since his 1994 animated exploits. It detailed how I stayed up late in the eighth grade to read black and white reprints of the Webslinger’s tales. It even showed how – in 11 pages! – he and Steve crystalized my understanding of responsibility (and guilt) better than nine years of Catholic school.

“For me? Why thank you!” Stan accepted the gift graciously. He turned to his assistant. “Hold on to this for later.”

“And what do we have here?” Stan took my copies of Stan Lee Meets Spider-Man and The Last Fantastic Four Story. “These are some fine books here. Now…for covers like these, we need just the right color…”

He hemmed and hawed a few times before deciding which Sharpie best matched each logo and cover. (He chose red for Spider-Man and silver for Fantastic Four, the latter showing up nicely on the mostly black cover.) Each complimenting decision worked perfectly.

With stars in my eyes and still very few words in my mouth, I thanked Stan for his time.

Two hours later, as the Javits Center’s main floor began to close, I waited by the front doors for a friend. While pacing back and forth, I saw the now-familiar parting of the people while Stan and his entourage emerged. He was, of course, the center of the crowd-within-a-crowd as they made their way to events still happening downstairs. His assistant walked-and-talked with him like in an Aaron Sorkin-scripted scene. She carried a stack of folders against her chest. On top of that pile, facing outward, was a college literary magazine.

Writer. Editor. Co-Creator. Salesman. Ambassador. Chairman. Entertainer. Executive Producer. Cameo King. Through these roles and more, Stan Lee affected just about every pop culture consumer imaginable in true celebrity and legendary fashion. Still, he knew the importance of human connection. He was not he beyond controversy or flaw, but I will never forget meeting The Man and a man that day in 2008.

If you’ve been touched by Stan’s work, consider donating to the Hero Initiative. It benefits less fortunate comic creators by establishing a financial safety net for emergency medical aid and life essentials, as well as offering them access to paying work. The organization is particularly helpful to artists who worked in the industry before a royalty system existed.

Rest in peace, Stan. I know you’re dancing with Joan once again.